Croatia celebrates the successful completion of the first RHP project 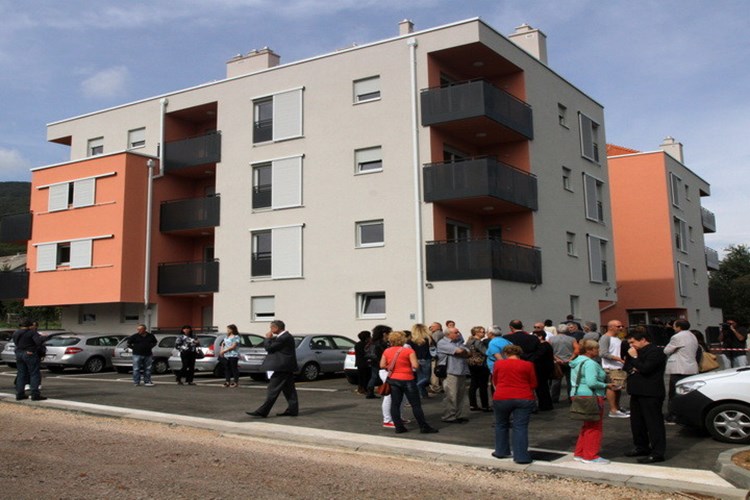 On 16 September 2015, the State Office for Reconstruction and Housing Care organised the inauguration ceremony of the apartment building in Korenica, now ready to accommodate 29 beneficiary families. The construction works were completed on schedule - in one year since the beginning of works. Ms Mirela Stanic-Popovic, Head of the State Office for Reconstruction and Housing Care, unveiled the commemorative plaque at the entrance of the building and handed over apartment keys to the new tenants, most of whom are returnees from Serbia and elderly persons currently residing in the collective centre of Golubic near Knin. Ms Stanic-Popovic, unveiled the RHP plaque. The ceremony was attended by a number of representatives from the Donor community. Mr Jerry Kalarickal, Program Officer for the Balkans, Bureau of Population, Refugees, and Migration, U.S. Department of State, said: "This is a milestone achievement for the RHP thanks to the efforts of all stakeholders, particularly the Partner Countries. We hope that the event today serves as a symbol of what can be achieved through regional cooperation". Also, several international stakeholders present - including UNHCR's Regional Representative for South-Eastern Europe Andrew Mayne - congratulated Croatia on this important achievement and warmly welcomed the new tenants. Korenica is located in the Municipality of Plitvice Lakes, which is part of the Areas of Special State Concern. The land plot of about 2 000 m2 was donated by the municipality. The total cost of the sub-project is approximately EUR 1.4 million, of which 75% is financed by the RHP Fund and 25% by the Republic of Croatia. Ms Stanic-Popovic concluded that she was very proud to inaugurate the first building financed by the RHP Fund. This project in Korenica provides housing to returnees who will be able to finally settle in decent conditions in Croatia, hence promoting regional reconciliation which is one of the cornerstones of the RHP. Family Petkovic (Milan and Koviljka). They lived in Korenica from 1964 to 1995 when they fled to Serbia. In 2004 they submitted their first application for housing. "Life will be much easier now with this apartment. We are very happy. We don't have much furniture but we like the apartment so much that we can put a chair in the middle of the living room and just enjoy the view", Ms Petkovic said. Family Andzic, Velimir and Danijela have two daughters: Tea, 6 and Hana, 2. Velimir is from BiH and Danijela from Croatia. They have lived in a collective center in Golubic since 2010. They are fond of Korenica and already know it well because Velimir's brother lives here. "This is the first home that we have as a family. We like Korenica because our children will be able to attend school and kindergarten", Velimir said.   Izvor: regionalhousingprogramme.org