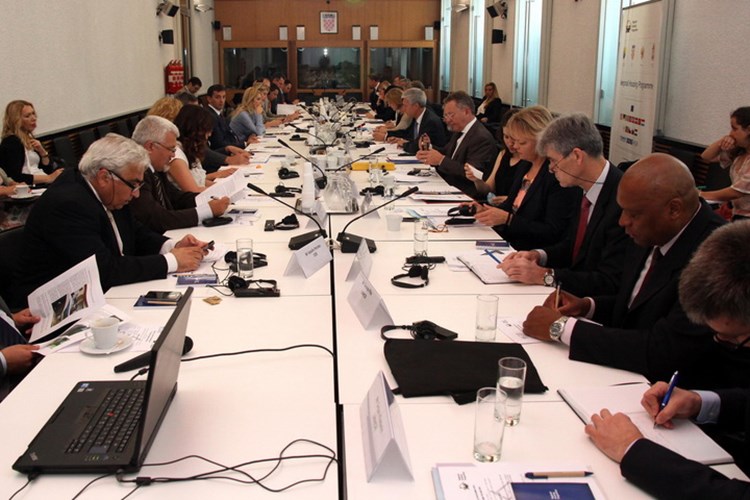 The 4th meeting of the Steering Committee of the Regional Housing Programme (RHP) took place on 23 June at the Ministry of Foreign and European Affairs in Zagreb. This gathering of Donors, Partner Countries and international stakeholders also offers the opportunity to see concrete progress on the ground: works on the project approved in April 2013 to construct an apartment building for 29 vulnerable families in the city of Korenica have just started. The Partner Country delegations were headed by Mr Mario Nenadic, Assistant to the Minister of Human Rights and Refugees of Bosnia and Herzegovina, Ms Mirela Stanic Popovic, Head of the State Office for Reconstruction and Housing Care of Croatia, Mr Predrag Boskovic, Minister of Labour and Social Welfare of Montenegro, and Mr Vladimir Cucic, Commissioner for Refugees of the Republic of Serbia. The representatives of Donor countries included among others Mr Gerhard Schumann-Hitzler, Director for Regional Cooperation and Assistance, Turkish Cypriot Community at the Directorate General for Enlargement of the European Commission, Mr Simon Henshaw, Principal Deputy Assistant U.S. Secretary of State and Mr Eduard Gnesa, Extraordinary Ambassador at the Swiss Department of Foreign Affairs. The other international stakeholders were represented by Ambassador Fletcher Burton, Head of the OSCE mission to Bosnia and Herzegovina, Mr Andrew Mayne, Representative of UNHCR in Bosnia-Herzegovina and CEB’s Vice-Governor Mr Apolonio Ruiz Ligero. The Donors praised the Partner Countries for the progress achieved during the previous year. In the past 12 months, RHP has moved from preparation to its implementation phase. Altogether 12 projects were approved by the RHP Assembly of Donors in 2013, worth a total of EUR 61 million in grants. 2014 will witness the first four projects (one in each Partner Country), approved in April 2013, coming off the ground. Thanks to the Partner Countries’ efforts and the support offered by the international community, more than half of the final beneficiaries (approximately 250 families) for these four projects have already been selected and are looking forward to having soon access to a durable housing solution. The meeting included a discussion on the recent floods in the region and its impact on RHP beneficiaries. The three Partner Countries concerned confirmed that the floods will not affect the implementation structures put in place and the resources dedicated to the RHP. All stakeholders agreed that close coordination of action to the benefit of floods’ victims and RHP beneficiaries needs to be undertaken. In recognition of the important progress made, in particular the commencement of the construction works on the ground which represents a major step forward, Mr Henshaw announced that the U.S. will donate an additional USD 10 million contribution to the RHP Fund by the end of 2014. The next RHP Steering Committee will be held on 20 November 2014 in Paris. Video report Izvor: regionalhousingprogramme.org